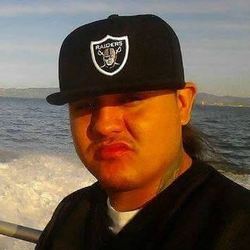 Humberto Martinez, 32, was choked to death by police in Pittsburg, California, on July 26, 2016, after fleeing a traffic stop for an expired license plate tag. One of the responding officers placed Martinez in a 'carotid chokehold' when Martinez resisted arrest, cutting off the flow of blood to his brain. The cops also broke 16 of Martinez's ribs after he allegedly bit one of them. Officers temporarily revived Martinez, but he died at a hospital later that day

Officers attempted to stop a vehicle around 2:30 p.m., but the suspect led them on a short pursuit and fled into a residence in the 4200 block of Hillview Drive.

They followed him inside where a struggle ensued, during which the suspect bit an officer's hand. At some point during the struggle they deployed a Taser, but it was ineffective, according to Capt. Ron Raman.

The suspect was eventually handcuffed with the assistance of additional officers, but moments later he became unresponsive and they performed CPR, Raman said.

On July 27, 2016 a news report included video of the incident embedded below.