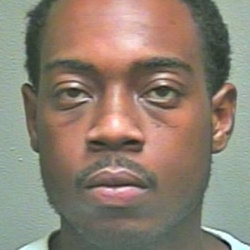 Herbert Hill, 25, was shot and killed in a firefight with officers in south Oklahoma City. Police said Hill shot an Oklahoma City police officer in the leg and back. Four officers and an Oklahoma County sheriff’s deputy were searching for Hill shortly before 7:30 p.m. Friday. Hill was wanted on a felony warrant on failure to register as a violent offender, said Oklahoma City police spokesman Capt. Paco Balderrama. Court documents show Hill was convicted in 2012 of shooting with intent to kill and sentenced to 17 years in prison. Hill was released after serving one year of his sentence and given 30 years probation. When officers arrived at Hill’s house at 1000 SW 62, they noticed Hill sitting in the front passenger seat of a vehicle in the driveway, Balderrama said. When the officers approached the car, Hill pulled a gun and began firing at the officers, he said. One Oklahoma City police officer, Sgt. John Townsend, was hit once in the leg. Another round grazed Townsend’s back, but his vest prevented the bullet from causing serious harm, Balderrama said.