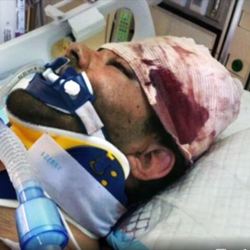 The man injured during an arrest Monday by the Columbus Police Department has died.

Members of the Columbus Police Department’s Patrol Division responded to a call on Moss Drive on Monday, Jan. 9 at 5 a.m.

During the investigation, Arreola resisted officers’ efforts to place him in custody and sustained an injury.

An EMS Unit responded to the scene and transported Arreola to the Midtown Medical Center.

The CPD requested the Georgia Bureau of Investigation to investigate to determine if Arreola’s condition was a result of the arrest or a previous medical condition.

Investigators now have to find out what caused a Columbus man to die after being injured during his arrest on Moss Drive.

We spoke exclusively with the family’s attorney Stacey Jackson hours after they found out their loved one passed away.

Jackson said they may consider filing a wrongful death suit against the Columbus Police Department.

What started as an investigation into an arrest call took a deadly turn Tuesday afternoon.

"You have a young man, who was from all accounts healthy - he encounters the police, and then 24-28 hours later, he's dead," Jackson said.

Arreola died while receiving treatment for injuries he had during a Monday morning arrest on Moss Drive.

We spoke with Jackson about the possibility of filing a wrongful death suit against the Columbus Police Department.

"Well, I think that's the reason I was brought in - to basically find out what went on,” Jackson said. “And not only for Hector's family, but for the community at large. You have blood about your face, the blood is matted in your hair by the time you get to the hospital. I can't see how that could possibly be a pre-existing injury. So I found that to be pretty, pretty laughable."

The Muscogee County Coroner's Office says Arreola's body will be sent to Atlanta Wednesday morning for the exam.

In the meantime, Jackson said he hopes the dashcam footage from the police car will shed some light on what actually happened to Arreola.