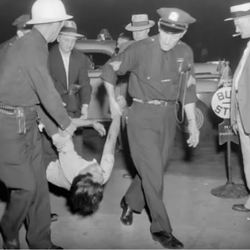 A race riot took place in Harlem, New York City, on August 1 and 2 of 1943, after a white police officer, James Collins, shot and wounded Robert Bandy, an African-American soldier; and rumors circulated that the soldier had been killed. The riot was chiefly directed by black residents against white-owned property in Harlem. It was one of six riots in the nation that year related to black and white tensions during World War II. The others took place in Detroit, Michigan, Beaumont, Texas, Mobile, Alabama, Los Angeles, California. In Beaumont and Mobile, the riots were white defense industry workers attacking blacks.

In Harlem, Bandy had witnessed a black woman's arrest for disorderly conduct in a hotel and sought to have her released. According to the police, Bandy hit the officer, who shot the soldier as he was trying to flee from the scene. A crowd of about 3,000 people gathered at police headquarters, after a smaller crowd had followed Bandy and the officer to a hospital for treatment. When someone in the crowd at police headquarters incorrectly stated that Bandy had been killed, a riot ensued in the community that lasted for two days and resulted in six deaths and hundreds injured, with nearly 600 arrests. The riot had a pattern mostly of vandalism, theft, and property destruction of white-owned businesses in Harlem, resulting in monetary damages, rather than attacks on persons. New York City Mayor Fiorello H. La Guardia ultimately restored order in the borough on August 2 with the recruitment of several thousand officers and volunteer forces to contain the rioters. City units cleaned up and repaired buildings. The mayor also supplied food and goods afterward to compensate for the closed businesses.

The underlying causes of the riot stemmed from resentment among black residents of Harlem of the disparity between the vaunted values of American democracy and the social and economic conditions they were forced to live under, including brutality and discriminatory treatment by the mostly white city police force. They resented the segregation of black troops serving with the United States, and wartime shortages created more difficult conditions in Harlem housing and supplies. African Americans suffered discriminatory practices in civil and private employment, and city services, which created tension as they tried to improve their lives. Bandy symbolized the Black soldiers who were segregated in the Army, even as the United States promoted the national fight for 'freedom.' Collins represented the white discrimination and suppression black residents had to deal with on a daily basis. The riot became a subject of art and literature: it was depicted in the "theatrical climax" of Ralph Ellison's novel Invisible Man, winner of the 1953 National Book Award, and in artist William Johnson's painting Moon Over Harlem.