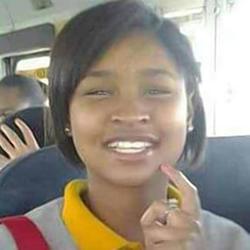 Shelbyville police officers arrived at McMillen's mother's house on January 10. McMillen had been living at the Maryhurst foster home in Louisville, Kentucky, and was visiting her mom for the weekend, where they got into a fight, according to BuzzFeed News. The Shelbyville police called a court-designated worker—a state official who makes legal decisions in cases involving juveniles—who then contacted a judge and requested that McMillen be detained. McMillen was charged with a misdemeanor assault and transferred to Lincoln Village, a state-run juvenile detention center in Elizabethtown. The police said McMillen's mother suffered minor injuries. Young people under the age of 18 who are charged with low-level crimes can be held in detention centers until a court decides what further action is needed. Their detention typically lasts about three weeks but can extend for much longer, according to the Office of Juvenile Justice and Delinquency Prevention. In 2014, Kentucky enacted a law that was meant to help teens like McMillen avoid the court system altogether. Maryhurst declined to comment specifically on McMillen's case, citing patient privacy laws.

McMillen had never been in detention before. A family member told 48 Hours' Crimesider that McMillen's one night at Lincoln Village was the only time she had ever been in detention. Prior to landing in the foster home, BuzzFeed News reported, McMillen lived with her father, who was awarded custody of her. But in November 2014, he died in his sleep. When McMillen spoke at his funeral, she promised to do well in school and make her father proud, a family member told BuzzFeed News.

At the detention center, multiple staff members physically restrained McMillen. Officials said McMillen repeatedly refused to remove her sweatshirt when staffers tried to search and photograph her during the booking process. "The staff performed an Aikido restraint hold to safely remove the youth's hoodie," a spokesperson for the Kentucky Department of Juvenile Justice said. "The purpose of having multiple staff involved in a controlled restraint is to ensure the safety of the youth and staff." A female staff member then conducted the pat-down and removed McMillen's hoodie. "As far as I'm concerned, that is a completely inappropriate use of a restraint," Michele Deitch, an attorney and juvenile justice expert in Texas, told 48 Hours' Crimesider.

A chapter Deitch wrote in the federal National Institute of Corrections' guide to working with youth in confinement covers "crisis management" for juveniles in detention.

"Situations in which there is not active violence, but a youth simply refuses to comply with an order or is passively resisting do not constitute an immediate necessity of force; policy should clarify this," Deitch wrote. "The continuum of force must offer options for staff--including separation of the youth from peers, verbal de-escalation, or the involvement of mental health staff--that do not involve hands-on measures." It is unclear if the restraint had anything to do with her eventual death, or if any other physical force was used against McMillen during her detention.[Counselor describes Gynnya] She was a "quiet, beautiful person...She didn't bother anyone, she didn't disturb anyone and didn't kick up any fuss."

McMillen was placed in a cell by herself. The next morning, McMillen did not respond when staffers twice offered her food or later when they alerted her that her mother had called. Although McMillen did not reply to staff members for several hours, no one appears to have checked on McMillen during this time. A Kentucky Department of Juvenile Justice spokesperson said staff members generally do not enter a detainee's cell unless there are "obvious signs of distress." It's unclear why McMillen was confined in isolation to begin with. It is unclear whether McMillen was merely in a cell alone or had been placed in solitary confinement. Kentucky is 1 of 10 states that either have no limit or allow for indefinite solitary confinement for juveniles as a form of punishment.

Authorities don't know yet how she died.

After a sheriff's deputy arrived to transport McMillen to court, Lincoln Village employees entered McMillen's cell and found that she was cold to the touch. 911 CALL: Staffers at Lincoln Village Juvenile Detention Center in Elizabethtown, Kentucky didn't start CPR on 16-year-old Gynnya McMillen until almost 11 minutes after she was found unresponsive in her cell.

This, even after noting that she had been unresponsive "in the sleeping position" for at least three hours prior to a deputy realizing she was "cold to the touch."

Kentucky officials said McMillen appeared "to have passed away while sleeping." Following the initial autopsy, the Hardin County coroner said there were no outward signs of trauma, such as visual bruising, and that it was unlikely she had a heart condition. The state's Justice and Public Safety Cabinet has launched two investigations into the girl's death, including a full autopsy. McMillen's family has demanded that authorities release the surveillance footage that shows her final hours, as well as a recording of the emergency call that led to her arrest.

At least two Kentucky officials have lost their jobs in the wake of the incident, and one has resigned. One detention center staff member, Reginald Windham, was placed on leave for failing to check on McMillen's cell every 15 minutes, as is required for detainees placed in isolation. On February 9, the governor's office and justice cabinet announced that they'd fired Windham, following news reports about his long-standing record of "unacceptable behavior." Personnel files provided to BuzzFeed News revealed that the Department of Juvenile Justice had disciplined or reprimanded Windham in five other incidents, including two that involved excessive use of force. In others, he was disciplined because he showed a lack of competency or professionalism. Bob D. Hayter, the head of the Department of Juvenile Justice, was dismissed from his job amid the investigation of the incident. The justice cabinet has not specified its reasons for Hayter's dismissal. According to the Kentucky Center for Investigative Reporting, the department's director of communications, Stacy Floden, also left her job in the wake of the state probe.

Gynnya McMillen's arrest is part of a growing trend.  The share of young girls in the juvenile justice system has been growing over the past 20 years, even as the number of arrests of young Americans has been on the decline. (My colleague Hannah Levintova recently broke down these numbers.) The percentage of girls who are arrested, detained, and end up in court increased between 1992 and 2013. Arrests of girls rose from 20 percent to 29 percent during this time, while detention of girls rose from 15 percent to 21 percent, according to the National Women's Law Center. The trend has disproportionately affected girls of color: Black and American Indian girls were, respectively, 20 percent and 50 percent more likely to be detained than white girls. In 2013, black girls were the fastest-growing segment of the juvenile justice population.

16 year old McMillen was at the Lincoln Valley Regional Juvenile Detention Center in Elizabethtown, Ky. and died in custody, but officials have released very few details about her death. Crimesider was denied an FOIA request for two videos relating to Gynnya's case. Audio has been released. According to the initial autopsy report, McMillen didn’t have any bruising and Cornoner Will Lee said it was unlikely she had a heart condition.

Video shows that the employee charged with monitoring Gynna McMillen every 15 minutes failed to do so. And when McMillen was unresponsive during the times she was checked on, the employee didn’t ensure that she was fine. McMillen was found dead when someone came to get her for a court hearing. Audio recordings reveal CPR started 11 minutes after staff found Gynnya McMillen.

A Facebook page “Justice for Gynnya McMillen,” was created by her sister asking for answers. Information has not been released as to why McMillen was in the center.

Ron Hillerich, an attorney who represents McMillen's mother, told 48 Hours' Crimesider on Feb. 5 that he plans to hire experts to examine surveillance video from the detention center, as well as the girl's autopsy. An online petition for the videos had more than 42,000 signatures, as of Sunday afternoon, according to Color of Change, the website where the petition is posted.

March 2016 Reginald Windham and Victor Holt were each charged with one count of second-degree official misconduct as a result of a state police investigation into the Jan. 11 death of 16-year-old Gynnya McMillen.

March 2016 Claims of camera malfunction at time of restraint applied

August 2016 Two former employees of a state juvenile-detention center in Hardin County lied about performing more than two dozen bed checks on 16-year-old Gynnya McMillen during the time she died, according to recently released court records.

Former supervisors Reginald Windham and Victor Holt "knowingly recorded false information" on room observation sheets 15 and 17 times, respectively, on the night of Jan. 10 and the next morning, according to documents filed in their criminal cases on July 28.

May 2017 Kentucky to close detention centre

NYC Shut It Down: The Grand Central Crew #blacklivesmatter

A Moveon petion has been started by Gynnya's brother in the following terms:

On January 11, my sister, Gynnya McMillen, was found dead in her room in a Kentucky juvenile detention center after being in custody for only a little over 24 hours. Since Gynnya’s death, the police are stating that they “didn’t expect that foul play was involved,” but it has recently been discovered that Gynnya was improperly monitored and immobilized when staff placed her in a martial-arts hold hours before she was found dead.

There are so many suspicious factors surrounding the death of my sister. Governor Matt Bevin has fired KY Juvenile Justice Commissioner Bob Hayer and a staffer at the detention center, yet has failed to provide answers to how Gynnya died. Please sign this petition and join my family in demanding for Governor Bevin to release the Lincoln Village Regional Juvenile Detention Center surveillance video and provide answers about Gynnya’s death.

Community rememberance at the detention centre.

May 2016 Color of Change Petition Delivered with 193,700 signatures