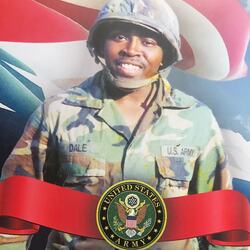 Gulia Dale III, a 42-year Army veteran, was fatally shot on the Fourth of July by police officers in Newton, N.J..

It was the Fourth of July in Newton, N.J., and Major Dale’s relatives believe the sound of fireworks near his home had unsettled him, reviving memories of his time in combat and aggravating the post-traumatic stress he had fought after 42 years in the Army.

Karen Dale had called for help four minutes earlier, concerned for her husband’s safety and telling a 911 dispatcher he was acting erratically and had a gun. A .45-caliber Glock 21 was found near his body, officials said. He was holding it when the officers fired, their lawyers said.

The nighttime encounter lasted less than 15 seconds. When it was over, Gulia Dale III, a Black man and retired Army major, was dead, fatally shot by two white police officers responding to an emergency call from his worried wife, Karen.