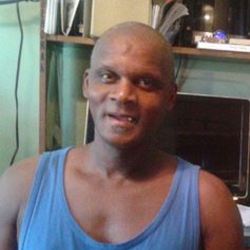 Friends and family confirmed the victim  was Gregory Frazier, age 56, who lived at the Pompano Beach home where the shooting took place. His sister, Deborah, had called 911 because he had been arguing with her daughter.  He had a knife in his hand—the small, Swiss Army-style pocket knife that he always carried, she told dispatchers.

When officers arrived, the argument was over, and Frazier was sitting outside in his backyard eating chicken wings and fries. Quartaze Woodard, Frazier's nephew, who was at the scene, says three deputies showed up and told Frazier to get down on the ground. Frazier responded, "Leave me alone." The deputies repeated the order. Again, Frazier asked them to leave him alone. After that, Woodard says, the officers shot him. Then, after handcuffing him, and removing the handcuffs once they realized he was non-responsive, they attempted to perform CPR. It was too late.

"I never would have called the cops if I'd known this was going to happen," Deborah Frazier says. "They just came in and started shooting right away."

He was shot in the back six times while eating chickenwings on his back porch.

During a community meeting Monday night to discuss Friday's deputy-involved shooting in Pompano Beach, Broward Sheriff Scott Israel announced that the agency will no longer investigate shootings involving their own employees.