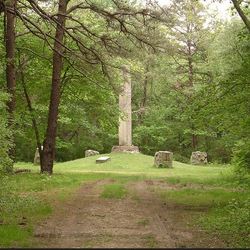 Back in the northeast corner of the Smith’s Castle property in Wickford lies the mass grave of 40 men who died as a result, directly or indirectly, of the Great Swamp Fight of December 19, 1675. This grave stands as a silent sentinel testifying to one of the darkest hours of Colonial history; you see, the Great Swamp Fight’s impressive sounding moniker is a misnomer; it should rightly be called the Great Swamp Massacre.

The Narragansett people and the settlers of the Rhode Island Colony were unwilling participants in the greater conflagration, known as King Philip’s War. The war was between the Wampanoag tribe, headed by Chief Sachem Metacomet, known to the settlers by the name they gave him, Philip, and the two Massachusetts colonies along with the colonies in Connecticut. The colony of Rhode Island, known even then for its religious freedom and tolerance, as well as the fairly peaceful relationship it had with the Narragansetts, was viewed with suspicion by the various leaders in Massachusetts and Connecticut, and was not invited to join this Colonial union of war. The Narragansetts were drawn into the fray because of their refusal to turn over to the English the women, children and elders of the Wampoag they were sheltering while the Wampanoag warriors fought with the Colonists. Canonchet, the Chief Sachem of the Narragansett people, responded to this request with the following statement: “Neither a Wampanoag, nor the parings from a Wampanoag’s nails shall I deliver to the English!” The English of Connecticut and Massachusetts, therefore, considered the Wampanoags and the Narragansetts as one enemy; one enemy to be exterminated.

So, in the early part of December 1675, the Colonial troops began to gather at Smith’s Blockhouse. This location was chosen not only because of its central location, but also because Richard Smith was already hedging his bets. He felt sure that an indirect result of all this would be the eventual dissolution of the Colony of Rhode Island. Connecticut coveted the western shores of the Narragansett Bay and Smith wanted to be on the winning side of this political subterfuge. There were eight companies from Massachusetts and five from Connecticut, totaling more than 1,000 men, all under the command of Governor Winslow of Connecticut, who was made a General for this campaign. Captain Benjamin Church, a career military man and the only true Rhode Islander involved, accompanied General Winslow as his adviser.

On the morning of December 19, a Sunday, the troops set out on the 15-mile march to the Narragansett stronghold, located somewhere deep in the tangles of the Great Swamp, in what is now West Kingston. This Sunday was chosen specifically – firstly, for decades now, the Colonists had preached that bearing arms on the Sabbath was sinful, so the natives would be less likely to expect an attack on Sunday. Additionally, the weather had been extremely cold and the waters, muck and mire of the Great Swamp would be frozen solid. There were more than 2 feet of snow on the ground as they departed, and the march was grueling at best, and some of the men complained of frostbite. Along the way they captured a Narragansett known as Peter; after torturing him, he relented and betrayed his people by giving up the location of the encampment, which was located on a few acres of dry ground deep within and encircled by the swamp. On this island of sorts were gathered about 3,500 souls, the old men, women and children of the tribe as well as a similar contingent of Wampanoags. They were protected by a small group of Narragansett warriors.

The island stronghold consisted of a natural ring of large trees with the spaces between filled in with wooden logs driven into the ground. The only way to enter this fortress was across a large log that lay across the water. The warriors knew in advance of the force’s arrival and were prepared to defend this “bridge” into their sanctuary. Skilled fighters, they knew what they were doing, and after the first volley of arrows, half of the Captains who commanded each company were dead. During the three hours of confusion that ensued, more than 200 colonists were killed or mortally wounded and more than 1,000 Narragansett and Wampanoag lay dead. Countless others died hiding out in the frozen swamps over the next few nights. After the killing was done, the surviving colonists whipped into a frenzy and, much to the chagrin and against the orders of Captain Church, began to torch every wigwam and shelter in sight. Church, the experienced soldier, knew that the frigid cold of night was fast approaching and the food and shelter those wigwams afforded could save many lives. Without shelter, the only option open to the victorious English was to gather up their dead and wounded and begin the 15-mile march back to the Blockhouse. Twenty-two wounded men, who might have lived could they have availed themselves of the shelter provided by the now destroyed wigwams, died en route back to Smith’s Castle. The survivors staggered back to Cocumscussoc December 20 at 2 a.m. The 40 bodies they had brought back with them were buried in the mass grave over the course of the next few days. A full accounting of the occupants of the mass grave has never been possible.

Down in the Great Swamp, at a location a bit distant from the actual battle site, is another monument that stands, symbolically, hand in hand with the 40 men stone. It memorializes the event and remembers the brave warriors who died, as well as the women and children who fell in the blood-stained snow hearing as their last sound the cries of the old ones as they burned in the wigwams. All this so that the colonists of Connecticut and Massachusetts could “Restore the peace which, through the blessings of God, we have so long enjoyed.” And this … this, the massacre at the Great Swamp was only the beginning …

DRIVING DIRECTIONS: Take Rt. 2 South into West Kingston. About 1 mile past the junction of Rt. 138, look for the old white historical marker Great Swamp Monument on the left, just past Liberty Lane. At the sign, take a left onto Great Swamp Monument Drive (a bumpy dirty road) and park at the gate.

CLUES: From the parking area follow the old road easterly to the old circular parking area. From there, the grassy road leads east again out to the monument. The monument is placed at the sight of the Great Swamp Massacre of Sunday, December 19, 1675. During King Philips War the Narragansetts took refuge on this piece of high ground in the swamp. They would have been well protected from their enemies but a cold spell froze the waters of the swamp. The Colonist led by Benjamin Church, marched across the ice and charged the encampment setting it on fire and killing almost 1,000 Narragansetts, many of them women and children. The monument is a huge granite monolith ringed by 4 granite stones representing the colonial regiment.
Stand at the North side of the monolith. Walk 42 paces at 10º to reach a small deer trail on your right. There is a white pine at 45º of great girth about 15 feet from where you stand. Bushwhack in to unearth a slice of history on the north side of the tree under a stone.