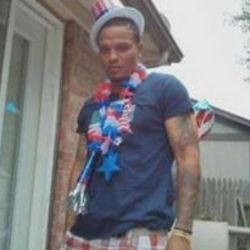 Gwinnett County police spokesman Sgt. Brian Doan said officers responded to the 5100 block of Rock Place Drive around 4 a.m. Saturday after a 911 caller “stated that there was a male neighbor that was locked in his garage who was irate and possibly armed.” Officers made contact with the man and “an altercation ensued,” Doan said. “The suspect went unresponsive at the scene and was transported to Eastside Medical Center where he was pronounced dead,” Doan said. “Due to this being an in-custody death, the GBI has been contacted and will handle the investigation.” Doan confirmed Saturday morning that no shots were fired. Gwinnett police did not provide any further information.

On July 11, the family does not deny Mann was on drugs. They said he'd had a relapse. And they agree he was acting erratically. But the family says, that 911 call was made because Mann needed medical attention. But according to the GBI, Gwinnett police instead used a taser to subdue him.

"They were informed this person was having an episode, drug related," said attorney Scott Hoopes. "And at that point, there should have been medical professionals on site to ensure his safety."

They, the family says there is concern over what they were told. Saturday, Gwinnett Police released a statement saying "an altercation ensued" and the "suspect went unresponsive at the scene." The next day, an update from the GBI said Mann was "stunned with the taser" when he resisted officers.

The GBI report went on to say a gun and suspected methamphetamine was found in the garage where Mann was.

But Mann's family still has questions.

"They were led to believe this was a drug overdose, that he was unresponsive at the time they entered the garage," Hoopes said. "But you don't put a taser on an unresponsive person."