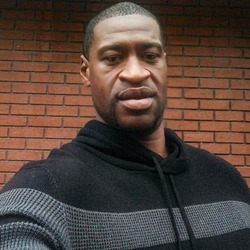 George Floyd, a 46-year-old African-American man, died on Monday after being handcuffed and pinned to the ground by a white police officer’s knee, in an incident that was recorded on video and that incited large protests in Minneapolis in the days that followed.

The explosive footage, recorded by a bystander and shared widely on social media early Tuesday, led to community outrage, an F.B.I. civil rights investigation and the firing of the officer and three colleagues who were also at the scene.

On May 29, 2020, Officer Derek Chauvin, 44, was arested and charged with third-degree murder and second-degree manslaughter in the case. He also was accused of ignoring another officer who expressed concerns about Floyd as he lay handcuffed on the ground, pleading that he could not breathe while Chauvin pressed his knee into his neck for several minutes.  Chauvin, who was fired along with three other officers who were at the scene, faces more than 12 years in prison if convicted of murder.

According to Hennepin County Jail records obtained by TMZ, Thomas Lane, one of the officers charged with aiding and abeting Chauvin, was conditionally released on bond Wednesday (June 10) after posting a $750,000 bail. His attorney, Earl Gray, would only say, “It’s pretty good news” when asked about how his client raised the money needed for release.

A June 15 news report indicated that audio between a 911 dispatcher and a supervisor indicates concern about the use-of-force involved in the deadly Memorial Day encounter.

On July 8, 2020, more complete transcripts of Minneapolis police body camera footage, were filed in state court as part of an effort by one of the officers on the scene, Thomas Lane, 37, to have charges that he aided and abetted Mr. Floyd’s murder thrown out by a judge.

On Wednesday, July 15, 2020, attorneys for the family of George Floyd filed a federal civil rights lawsuit against the city of Minneapolis and the police officers involved in his death, calling the killing part of "a public health crisis" in Black America.

In July 2020, fired Minneapolis police officer, Tou Thao, who stood guard as fellow cop Derek Chauvin knelt on George Floyd’s neck for nearly nine minutes, leading to Floyd’s death, filed to have his charges dismissed. Thao claimed the felony charges brought against him were “not supported by probable cause."

In a ruling on August 7, 2020, a Hennepin County judge ordered the public release of body camera video from the night George Floyd was killed after a challenge by a coalition of local and national media companies, including the Star Tribune.

On October 8, 2020, the Hennepin County judge changed the conditions of Chauvin's bond, a day after he was released after posting $1 million. The former Minneapolis police officer can now reside in Minnesota OR a bordering state pending trial.

June 2020 What would a non-police first response look like