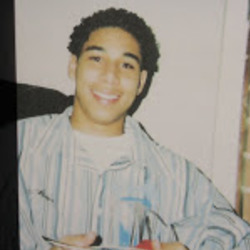 At 4:45PM on September 20th, a police officer shot and killed a man on the street in North Oakland. Gary King, Jr., age 20, had just exited a store on the corner of 54th street and MLK. Apparently an Oakland police sergeant approached him for questioning. The details of what happened next are unclear, but it seems that it involved the officer using a taser. King pulled away and it appears that during his attempt to flee, the officer shot him twice in the back.

A swarm of police cars (including helicopters) arrived on the scene very quickly, but it was a number of minutes before an ambulance arrived. In the meantime, one officer appeared to be performing CPR. Gary King reportedly died at the hospital a short time later. Police on the scene dealt somewhat roughly with bystanders, including relatives of Mr King.

Someone spray-painted "Police did this" on one of the BART support columns on MLK at 54th. A memorial with candles and personal items is set up at the place where the shooting occurred.

This is the third time this year that the Oakland police have fatally shot someone. The Oakland police sergeant who shot Gary King was involved in two previous shootings in recent years, one of them fatal.

The ((Oakland)) City Council on Tuesday night approved a $1.5 million settlement with the family of a 20-year-old man shot and killed by police two years ago.

Gary King Jr. was fatally shot by police Sgt. Pat Gonzales during an altercation Sept. 20, 2007. The city maintained Gonzales believed King had been reaching for a gun, but the killing prompted public outcry from people who believed King was wrongfully killed.

Five years and seven months after Gary King Jr. was shot to death by Oakland Police Sergeant Patrick Gonzales on 54th Street and Martin Luther King Jr. Way, the Alameda County District Attorney has cleared Sgt. Gonzales of criminal misconduct in King Jr.'s death. On September 20, 2007 Gonzales mistook the 20-year-old exiting a store on the street corner for a murder-robbery suspect, and the ensuing confrontation left the young man with two gunshot wounds in his back, handcuffed, and bleeding to death.

The DA's findings puts paid to the possibility that Sgt. Gonzales could face state criminal charges for King Jr.'s shooting.

Over the years, Sgt. Gonzales has become a lightning rod for critics of the troubled Oakland Police Department, which is struggling to fulfill federal reforms begun a decade ago. Since joining OPD in the late 1990s, Gonzales has featured in some of OPD's most controversial moments, from a police assault on unarmed protesters opposing the Iraq War in 2003 and the shooting of cop-killing parolee Lovelle Mixon to the department's violent response to Occupy Oakland. He has been involved in four officer-involved shootings over the years, and the city has paid out $3.6 million to date in legal settlements for incidents in which Gonzales played a part.

On Monday, September 24th, over 100 family, friends, neighbors and other concerned people protested at Oakland City Hall against the murder of Gary King. Gary's family is determined to continue to fight for Justice for Gary. There will a protest every Thursday at 12 noon at Oakland City Hall.