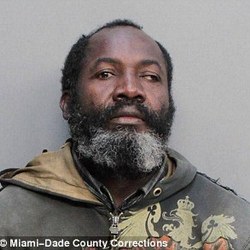 Dozens of children attending a summer camp were left traumatized after watching a police officer shoot dead a homeless man in the middle of a Miami park. Fritz Severe was shot in Gibson Park, in the Overtown area, on Thursday morning in front of as many as 60 witnesses - including children. The officer, named as Antonio Torres, who has been in the force for 20 years, is said to have discharged his weapon after Mr Severe refused to drop his weapon. But when Miami Police Chief Rodolfo Llanes was pushed for details later, he said he could not confirm whether the pipe was brandished during the confrontation.

A Miami police officer killed a homeless man, shooting him five times Thursday outside a public library for failing to drop a stick he was holding.  The shooting was witnessed by 40 to 60 people, many of whom were children attending a YMCA summer camp taking place at the park nearby.

A worker at Gibson Park in the Overtown neighborhood of Miami had reportedly called police on Fritz Severe, a 46-year-old vagrant man, around 10 a.m. because a he was brandishing a metal stick, saying they were concerned about the safety of the children.

Antonio Torres, 41, a 20-year police veteran, responded to the call with a rookie he was training and confronted Severe, ordering him to drop the object.

Police allege he did not comply and that is when one of the officers opened fire.  Severe was transported to Jackson Memorial Hospital where he died from the injuries. Neither of the officers were wearing body cameras.