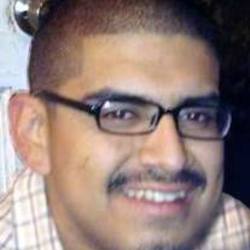 Garcia was parked in a stolen car at a gas station, police said. When a deputy walked toward him, he drove forward and hit the deputy, who then fatally shot him, according to authorities.

Deputies were doing extra patrols and checking vehicle license plates in the area because of the fatal shooting of 18-year-old Christopher Bishop as he was shopping at a convenience store the day before, Hernandez said.

The deputy pulled into the station shortly after 5 p.m., parked behind the Integra and went up to talk to Garcia, who was standing outside the car at the pump, Hernandez said.

Garcia told the deputy to leave him alone, Hernandez said, and the deputy returned to his patrol car to double check the registration and make sure it was reported stolen.

The registration came back again as reported stolen, Hernandez said, and by that time, Garcia had gotten back into the Integra.

“The deputy comes back to the car, trying to get the suspect’s attention. He asked him, ‘Whose car is this?’ and the suspect says, ‘None of your business.’” Hernandez said. “Then he [Garcia] turns the car on and at the same time starts to reach behind the passenger seat.”

The deputy was standing by the driver’s side door, Hernandez said, when Garcia allegedly accelerated and turned sharply to the left, striking the deputy with the car.

The deputy fired at Garcia, striking him multiple times. The car moved forward and stopped when it struck a sign advertising the station’s gas prices

Hernandez said the deputy pulled Garcia out of the car and began CPR until paramedics took him to the hospital. Garcia was pronounced dead at the hospital at 6:04 p.m., according to coroner’s records.

The deputy, who has not been identified, was also taken to the hospital, where he was treated for a strained neck and “minor bruising” on his left and right thighs, Hernandez said.