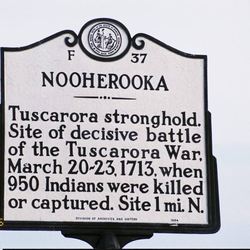 The Moore Expedition and the Fall of Fort Neoheroka

Pollock made every effort to supply the garrisons in Bath County and maintain the small forces operating there. Meanwhile, South Carolina had assembled a new force to further aidNorth Carolina. These troops included 33 white men and nearly 900 Indians under the command of Col. James Moore. Early in December 1712, Moore arrived at Ft. Barnwell on the Neuse, which was low on supplies. He then moved down the river to New Bern and on to the fortified town of Bath. Finding no supplies at Bath, Moore then marched into Albemarle County where the harassed North Carolina government attempted to feed the more than 900 men.

Every effort was made by Pollock to prepare the exhausted colony for a final attack on the Indians. With everything ready, Moore moved out of Albemarle County on January 17, 1713. Extremely bad weather and an unusually deep snow forced Moore to halt at Ft. Reading on the Pamlico until February 4, when he continued his march on the Tuscarora towns.

The chief Tuscarora stronghold was now Ft. Neoheroka located a few miles above old Ft. Hancock on Contentnea Creek. About March 1, 1713, Moore laid siege to this well-protected log and earth fort with a force of over 1,000 whites and Indians. On March 20, the final attack was launched, but it was not until March 23 that the last resistance was crushed. The victory was complete and crushed forever the power of the Tuscarora nation.

In the battle, the Tuscarora lost at least 392 killed and burned within the fort and 166 killed or captured outside the fort. In addition, the attackers captured 392 of the Indian defenders, making the total loss of the Tuscarora 950 men, women, and children killed or captured. The remaining hostile Tuscarora abandoned their other strongholds and fled deep into the interior toward the Virginia border, most of them eventually going to New York where they joined the Five Nations.

The war was not over, however, for at the same time Moore was attacking Ft. Neoheroka, the Machapunga and Coree had been striking at settlements along the Pungo River, a short distance below Bath, and in the vicinity of Mackays. After the fall of Neoheroka, Pollock decided to stamp out this resistance immediately and requested Moore to send some of his Indians into the Pamlico area to hunt them down.

Moore gathered the 120 or 130 Indians who had not returned to South Carolina and marched to the Pamlico where, in June 1713, he attempted to crush these remaining hostiles. He was only partially successful, for as one contemporary account states, the trackless wilderness from which these Indians operated lay "between Matchapungo River and Roanoke Island which is about 100 miles in length and of considerable breadth, all in a manner lakes, quagmires, and cane swamps, and is . . . one of the greatest deserts in the world, where it is almost impossible for white men to follow them." After Moore's swamp campaign, matters quieted down for several months and about September 1, 1713, Colonel Moore returned to South Carolina.

By the spring of 1714, one or two small bands of Indians were once more terrorizing the Bath County plantations. One account describing their activities explained that "they rove from place to place cut off two or three families today and within two or three days do the like a hundred miles off from the former. They are like deer — there is no finding them." Throughout 1714, Bath County was kept in a constant turmoil and Ft. Reading on the Pamlico, along with other strategic points, remained garrisoned by a force of whites and Indians.

Not until February 11, 1715, did these groups of hostiles sign a peace treaty with the North Carolina government, and agree to accept settle on a reservation in Hyde County near Lake Mattamuskeet. With this treaty the war came to an end, and the citizens of Bath County and Bath Town were free once more to follow the pursuits of peace. The war's cost in lives and property were incalculable. The Indians had exacted their revenge for real or fancied wrongs in full measure.

As the Tuscarora War came to its sad end, a normal way of life gradually returned to Bath and its vicinity. The town's swollen population gradually dispersed as settlers returned to their burned plantation homes and weed-choked fields, and as orphans and widows found refuge with relatives and friends. Forts, garrisons, and sentry duty no longer lost their importance.

To many, however, Bath County appeared finished. A frontier region, poor before the Tuscarora War, now lay completely devastated, with many of her leaders victims of war and disease. Yet, the last of the hostile Indians had not surrendered when the work of rebuilding got under way.

The town of Bath, where life had not ceased in the darkest days of the war, appears to have experienced a minor boom in the period immediately following the conflict. Lots were purchased from the town's commissioners, resold, and resold again. New mercantile houses were opened; Governor Charles Eden honored the little town by purchasing several lots and a home on Bay Street; Christopher Gale sold his plantation, "Kirby Grange," and moved into his town house on Bay Street, probably to ease the performance of his duties as North Carolina's first chief justice; Maurice Moore, hero of the late war, purchased lots and a home beside that of Gale; Edward Moseley, long-time speaker of the General Assembly and perhaps the colony's finest citizen, acquired a home and lots in the town; and Edward Travis, physician, settled in a house on Bay Street in late 1716.

Settlers would come and go, and within a few short years the citizens of Bath Town would experience the effects of piracy — and meet the most notorious rogue ever to menace the high seas.