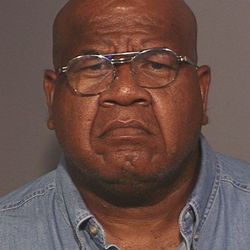 Filimoni Raiyawa, 57, died Thursday morning, July 30, 2015, on Lombard Street in San Francisco as he fought with police officers who tried to take him into custody, authorities said. Two officers were injured in the confrontation. Raiyawa was caregiver to 96-year-old Solomon Cohen who had been beaten earlier that morning. Raiyawa fled the Cohen’s home in a light blue Honda Odyssey before an ambulance arrived, sheriff’s officials said. According to San Francisco police, he rear-ended a BMW, pushing it across the street and into parked cars. The victim in the crash got out to talk to Raiyawa, who appeared incoherent and was making disturbing statements about God and “God’s will,” said police Chief Greg Suhr. The victim backed away, police said, and called 911 as Raiyawa got out of his car and approached him in a threatening manner, eventually chasing him around the block.

Two responding police officers found him at Lombard and Pierce streets near the Surf Motel. “He struck one of the officers several times about the head and shoulders, beating her to the ground nearly unconscious, and throwing her partner by the wrist,” Suhr said. More officers arrived as the suspect walked to the IHOP restaurant. The two officers who initially confronted Raiyawa and several others joined to take him to the ground as he struggled, Suhr said. They put him in handcuffs, but within minutes, he went into distress and stopped breathing, Suhr said. Efforts to resuscitate him were not successful and he died at the scene.

Willie Gunnari, 35, a witness who lives on Lombard said one officer grabbed the suspect from behind and tripped him to the ground. Six or eight officers then swarmed the man and held him. Suhr confirmed that at least one officer used a baton, but could not say how many officers were involved in handcuffing Raiyawa. All the officers will be placed on administrative leave, as per department policy. Investigators were able to collect surveillance video from a nearby building that documented the struggle, Suhr said.