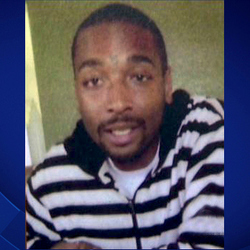 When police conducted an "investigative stop" of 25-year-old Ezell Ford on a Los Angeles sidewalk, he "wheeled around and basically tackled the lead officer," then went after his weapon, an LAPD spokesperson told the LA Times. But in an interview with KTLA News, a woman who identified herself as Ford's mother said he was lying on the ground, complying with the officers' orders, when he was shot in the back. On Sunday afternoon, a handful of people protested the shooting outside LAPD's headquarters. The LA County District Attorney and the department's Force Investigation Unit investigated the shooting.

After his death his parents said their son had been diagnosed with depression, bipolar disorder and schizophrenia, and that everybody in the neighborhood, as well as police, were aware of this.  One of the officer involved in the shooting, Sharlton Wampler, had previously arrested Ford on marijuana possession charges in 2008.  Ford also had a prior conviction for trespassing.

According to LAPD commander Andy Smith in August 2014, Wampler and Villegas saw Ford walking on the sidewalk at 65th Street and left their vehicle.[The two officers confronted Ford as part of an "investigative stop" at around 8:20 pm.  They told investigators that though they carried a Taser in the patrol car, neither took it out, and Villegas instead drew his gun. Villegas said he did believed Ford may have been armed because he was in "a gang area". Villegas soon put the gun away and repositioned himself as the "cover" officer while Wampler approached Ford. After the release of Ford's autopsy, LAPD chief Charlie Beck said Ford walked away after Wampler and Villegas left their vehicle to speak to him.  An earlier press release said Ford looked towards the officers but kept walking and "made suspicious movements, including attempting to conceal his hands". According to Beck, Wampler and Villegas told detectives Ford concealed his hands as they attempted to stop him. According to Beck's account the officers then followed Ford to a driveway where he crouched between a car and some bushes.Wampler and Villegas said they believed Ford was trying to dispose of drugs that were in his possession, which Wampler felt was sufficient evidence to arrest him. No drugs were found in the vicinity, however.

Two witnesses disputed the officers' claim that Ford had concealed his hands, and said that he had raised his hands as the officers left their vehicle. They also said that Ford did not tackle an officer, and was instead tackled to the ground by one of the officers.  Ashanti Harrison, a neighbor, said he saw the shooting from a second-story window, said Ford had put his hands in the air when he was tackled to the ground and shot three times. Harrison said that while on the ground Ford "was struggling like he didn't want anyone on top of him, didn't want anyone holding him down". Two women who were in the home adjacent to the driveway said Ford had not been on top of one of the officers, and had instead been face-down with the officer on top of him.

In September 2014, Ford's family members filed a federal wrongful-death lawsuit against the LAPD.  They voluntarily dismissed this suit in June 2016.

In October 2014, the South Central Neighborhood Council passed a resolution demanding the the Los Angeles City Council direct the LAPD to release the autospy report.  The report was not released until December 29 of that year.

In June 2015, the Los Angeles Police Commissioners ruled that one officer had been justified in the shooting, while the other officer was unjustified, had acted outside of LAPD policy, and had violated Ford's civil rights by detaining him.  However, the ruling, which is not legally binding, was sent to the LAPD Police Chief, who then had final say on how or whether to discipline the officers involved.  At the same time, the LAPPL heavily criticized the department for what it felt were stringent restrictions placed on the officers.

In July 2015 officials told a local news station that the LAPD would re-train all its officers in de-escalating confrontations with suspects and in approaching people with mental illnesses, in part in response to the shootings of Ford and Michael Brown.

LA county prosecutors declined to charge Wampler and Villegas in connection with the shooting.  However, on August 3, 2016, the police officers involved in this shooting sued, alleging they are being kept from returning to field duty due to racial discrimination and retaliation.

The initial incident drew many comparisons to the death of Michael Brown in Ferguson, who was shot and killed two days prior to Ford's death.  Civil rights groups initially met with law enforcement to discuss the investigation, as there was a mutual desire to avoid the rioting occuring in Ferguson and in L.A. after Rodney King's assault.