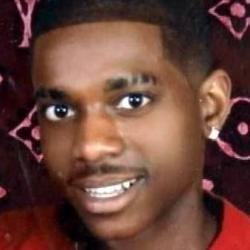 Jefferson’s family and friends claim that all he just trying to protect his family late Saturday night, before he was killed in cold blood.

Jefferson’s mother alleges that he ran outside their home on Pleasant Wood Drive, Dekalb County, Georgia, towards a crowd of people who had driven up in at least two cars, and were threatening his sister.

“We heard gunshots,” Candy Grimes said in an emotionally charged interview with WXIA, the NBC-affiliate in Atlanta, “I seen the dude in the green shirt shoot my son. I seen the guy, he had two hands, and he shot my son.”

Grimes said that, as soon as her son was shot, someone else drove a car into him. “By the time I got down there, the car was on top of my son. He was literally under the car.”

Jefferson suffered a gunshot wound to his chest and was transported to a local hospital, where he was pronounced dead. Jefferson was the father of a baby girl.