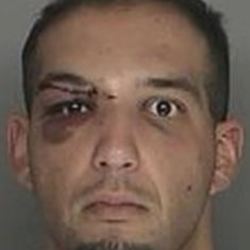 A man allegedly making threats against his ex-girlfriend was shot and killed by police in Carson after he opened fire on officers.

At about 2:30 a.m. Wednesday, Long Beach officers were flagged down by a woman at Pacific Coast Highway and Long Beach Boulevard. The woman told police that her ex-boyfriend, who was armed, was making threats against her and her family.

The gun battle escalated as the suspect fled on foot to nearby Mills Memorial Park, where he and officers exchanged more gunfire.

"It was like a shootout, so I took off and ran for shelter because my room faces the park, and I didn't know if any bullets were going to come through," said Sophia Byrd, an area resident.

While Long Beach police pursued the suspect on foot, LAPD was assisting in the air.

The foot pursuit continued as the suspect headed east into a neighboring residential area. Officers say it appeared the armed suspect was trying to break into a home. That's when officers shot and killed him.