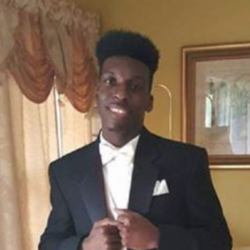 Emantic Fitzgerald Bradford Jr. was killed by an officer in the Birmingham suburb of Hoover during a Black Friday sale at the Riverchase Galleria mall on Thursday night.

Bradford’s family and their attorney, the high-profile civil rights attorney Benjamin Crump, told NBC News on Sunday that authorities should release any relevant surveillance videos from the mall or officer body-cam footage that would shed light on what happened prior to Bradford's death.

"Show us the video. The video will tell the story," Crump told NBC News.

Hoover Police Capt. Gregg Rector said the incident began with a fight between two people, with one man pulling a gun and shooting an 18-year-old man twice in the torso. A 12-year-old girl was also injured.

Police initially said Bradford was the gunman. But the next day, police issued a statement saying new evidence suggested Bradford “may have been involved in some aspect of the altercation” and had a handgun but likely did not fire the rounds.

The investigators said Friday they believe more than two individuals were involved in the initial altercation and at least one gunman is still at large.

The Alabama Law Enforcement Agency is leading the investigation and did not immediately respond to request for comment clarifying what involvement, if any, Bradford may have had in the initial altercation prior to the shooting or on if authorities would be releasing any videos.

Bradford's family said at an emotional press conference Sunday that they were devastated by his death and by their having learned about it on social media.

The state attorney general’s office announced that the Alabama police officer will not be criminally charged for killing Bradford in a shopping-mall shooting Thanksgiving night.

In a statement on Saturday, April 27, 2019, Hoover police said: “New evidence now suggests that while Mr Bradford may have been involved in some aspect of the altercation, he likely did not fire the rounds that injured the 18-year-old victim.”