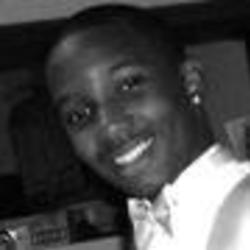 It was his father's birthday.

"My son gave me that card…" said Paul Glass, unable to finish his sentence.

Elisha didn't come home that night, and Saturday afternoon, police showed up to tell them why.

"Not real. There's no way," said Elisha's sister Brittany. "Are you sure? How? It just can't be. He was just here. He was just with us. We were partying. We were having fun for my dad's birthday."

Columbus Police said Elisha Glass was one of four people involved in the armed robbery of a Dollar General Store on Alum Creek Drive.

Security camera video obtained by 10TV showed the getaway car. Glass' parents said it was his, but detectives told them their son wasn't the driver.

Police, who were staking out the store, surrounded the car as two of the suspects got into it. As officers moved in, a suspect jumped from the car and started to run. He was then shot by police and fell to the ground.

Before it was over, Elisha Glass and Qusean Whitten were dead.

"It's indescribable. That's my only son. I saw him from the cradle up to college," said Paul Glass.

Elisha's family said he was the farthest thing from a criminal.