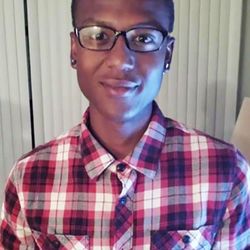 “This was a case of police brutality of someone so sweet,” said the man’s younger sister, Samara McClain. “He doesn’t deserve this. He shouldn’t be in a hospital.”

The incident unfolded just after 10:30 p.m. on August 24 when police said they received a call about a “suspicious person” wearing a ski mask and waving his arms as he walked down the street. McClain’s sister said he was headed to the corner store for some tea and often wore ski masks because he suffers from anemia and gets cold easily.

According to police, McClain refused to stop walking and grew violent and combative when they tried taking him into custody.

Police subsequently called paramedics and Aurora Fire Rescue due to the “level of physical force applied while restraining the subject and his agitated mental state,” a department news release stated. McClain was then given a “standard medication” to help him calm down.

The Aurora man would suffer cardiac arrest during the ambulance ride to the hospital.

Aurora police spokesman Anthony Camacho has remained mum about the extent of McClain’s injuries, as well as the medication that was provided to him. He said three officers are on paid leave as both the Denver and Aurora police departments, as well as the district attorney’s office, investigate.

Aurora city leaders on Wednesday canceled a contract for a third-party investigation of the death of Elijah McClain in police custody after city councilmembers raised concerns that a former police officer was hired for the job.

In July 2020, the Aurora Police Department (APD) announced that officer Jaron Jones resigned his position and identified him as one of three officers in photos allegedly depicting choke holds near the site of a struggle with Elijah McClain on August 24, 2019.

In July 2020, City Manager Jim Twombly, speaking to Mayor Mike Coffman and city council members in a study session, said the investigation of Elijah McClain’s death is too big for one person and a team will be assembled including both local and national members.

On July 23,2020, Aurora community leaders filed a class action lawsuit against the city’s police department and its interim chief, accusing them of unconstitutional treatment while breaking up a protest and violin vigil for Elijah McClain.

On July 28, 2020, the Colorado Department of Public Health And Environment added its name to the growing list of entities that have launched new investigations into the circumstances surrounding the death of Elijah McClain in Aurora last August. A spokesman for the state health department confirmed an in vestigation based on new information regarding the sedative paramedics injected into McClain after police officers detained him.

On August 11, 2020, the family of Elijah McClain filed a civil rights lawsuit against the city of Aurora, Colorado, in federal court.

On September 1, 2021, a Colorado grand jury indicted three police officers and two paramedics in the 2019 death of Elijah McClain.