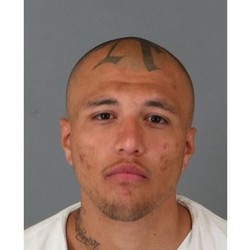 Two officers shot and killed a suspect in a gun battle that forced a lockdown at a church near Hemet on Friday night, April 17, authorities said.

The shooting was reported about 7:45 p.m. at Girard Street and Acacia Avenue. About 150 young adults were having a rally at a church at that intersection, just south of the Hemet city limits.

A Riverside County sheriff’s deputy and a California Highway Patrol officer were on assignment as part of an anti-gang task force when they stopped a vehicle.

The man in the passenger seat was on parole and had a felony warrant for his arrest, and the officers recognized him, which is why they made the traffic stop, said sheriff’s Sgt. Mike Manning.

“As soon as the car stopped, the suspect flung open the door and started firing at the officers point blank,” Manning said.

The officers, who were already out of their patrol car, returned fire, killing the suspect, Manning said.