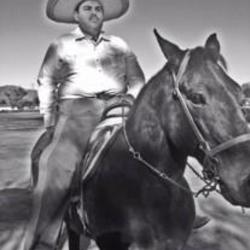 Efrain Herrera Jr., a 24-year-old Latino, was shot and killed by police Sunday, Jan. 17 in the 8800 block of Norwich Avenue in North Hills, according to Los Angeles County coroner’s records.

About 5:50 p.m. officers with the LAPD’s Mission and West Valley divisions responded to the area after someone reported a man with a knife, police said.

When officers arrived, Chief Charlie Beck told The LA Times, Herrera confronted the officers and approached them with a hunting knife. The officers tried to subdue the man with a Taser, the chief said, but it "wasn't completely effective."

Herrera continued to approach the officers, who then opened fire, Beck said.

Officers Raul Gonzalez and Adrian Cruz went to the location in response to a report of a suspect armed with a 6 ½-inch hunting knife in the middle of the street, Kelley said.

The officers ordered Herrera to stop advancing upon them and drop the knife, but he “ignored the officers’ commands and quickened his pace toward Officer Cruz on the passenger side of the patrol car,” according to a police statement.

Gonzalez, who was on the driver’s side of the cruiser, fired his Taser at Herrera while Cruz “simultaneously fired one round from his handgun,” police said.

Police say Herrera fell to the ground and let go of the knife, and Gonzalez fired the Taser at him again, while ordering him to get down on the ground. Herrera, however, apparently unaffected by the Taser, grabbed the knife and began standing up, police officials said.