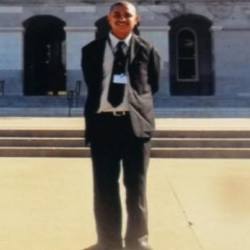 Deputies shot and killed 29-year-old Eduardo Rodriguez when they said he reached for a handgun during a traffic stop in East Los Angeles early Sunday morning., February 14, 2016.

Rodriguez died at the scene of the deputy-involved shooting, which took place just after 4 a.m. at Ferris Avenue and Whittier Boulevard, Los Angeles County sheriff’s officials said in a written statement.

Deputies stopped the car to investigate the possibility it was stolen, according to the statement. As deputies encountered the front passenger of the car, “he became combative with the deputies, and a struggle ensued.”

Deputies saw the Rodriguez reaching for a gun, the statement said. “Deputies gave several commands for the suspect to comply with their orders, however the suspect continued to struggle and refused to eschew his motion for his weapon. This resulted in a deputy-involved shooting.”

A .22-caliber revolver was recovered at the scene, officials said.