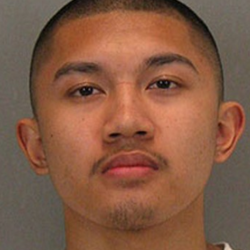 Edrian Rivera, 22, was a stabbing suspect allegedly armed with a meat cleaver who was fatally shot by officers in San Jose on Sunday, police Officer Albert Morales said. Around 6:20 p.m. Sunday, officers responded to a report of a stabbing in the area of Virginia Avenue and South 34th Street, Morales said. Arriving officers found a 31-year-old man suffering from multiple stab wounds and took him to a hospital for serious injuries that were considered life-threatening, Morales said. Rivera fled in a vehicle that struck multiple cars, then abandoned it in the area of Kammerer and South Sunset avenues, Morales said. Two officers later found the suspect in the 200 block of Packing Place, where he allegedly ran away from them, Morales said. The officers caught up with the suspect, who allegedly brandished a meat cleaver, according to Morales. The officers shot at the suspect, later identified as Rivera, who was struck and killed, Morales said. Both officers have been placed on administrative leave.