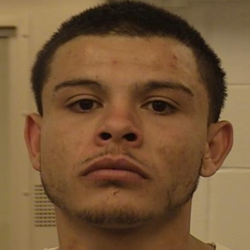 Investigators said as Alvarado ran down the block, he pointed a gun and shot at law enforcement.