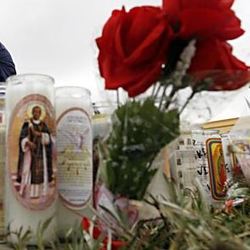 Franco was a homeless man who, according to police,“reached for his waistband.” Bystanders said they heard no commands, just sudden shooting - (at least 13 shots)

Then on Aug. 31, 2008, police shot and killed  Eddie Felix Franco, a 56-year-old homeless man who had a realistic-looking toy gun in his waistband. Officers fired at least 47 rounds at Franco when he appeared to reach for the gun. A nearby motorist was struck and grazed in the head by one of the bullets.

A Times investigation, published more than two months before the federal inquiry began, found that Inglewood officers repeatedly resorted to physical or deadly force against unarmed suspects. According to law enforcement records reviewed by The Times, Inglewood police shot and killed 11 people, five of them unarmed, between 2003 and 2009.