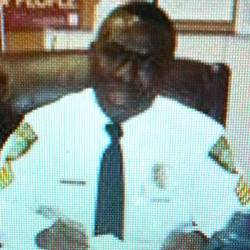 Earl Jackson, a 26 year corrections officer with Miami-Dade Corrections was killed by police in a shootout on July 25, 2015. According to the Florida Highway Patrol, Jackson died during a shootout after a harrowing five-hour search through the woods near little Micanopy in Alachua County. A trooper spotted Jackson on the grass near a fence line, aiming and firing his weapon, before he disappeared into the woods.

According to FHP Sgt. Tracy Hisler-Pace, a trooper traveling north on Interstate 75 saw a disabled vehicle on the side of the road just north of Micanopy on Saturday morning and went to investigate. The car was empty and its passenger door was open. The trooper then noticed a man alleged to be Jackson lying on the grass near a fence line near the woods. When he approached, Hisler-Pace said, Jackson rolled over and was pointing his gun. When the trooper drew his weapon, then retreated and called for backup, he heard three gunshots, she said.

“When I heard the news it knocked me back,” said retired Miami-Dade Corrections Officer Alphonso Bruton, friends with Jackson for 30 years. “It’s hard to imagine Jackson taking shots at anybody. He was such a warm-hearted friendly guy, with an infectious laugh.”

Friends of Jackson, disagree as to whether mental illness could have been a factor.

The Florida Department of Law Enforcement will undertake the investigation, only to determine if use of force by a law enforcement officer was warranted. Its findings will be passed along to the state attorney in Alachua County. It’s still not entirely clear, according to law enforcement, if Jackson was shot or if he shot himself.