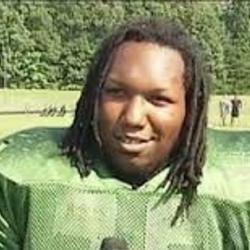 Virginia State Police officials say unarmed high school football player 19-year-old Dyzhawn Perkins was killed by a deputy after he attacked an elderly couple and in Buckingham County, Virginia. Perkins friends and teammates registered their shock at the killing.

Virginia State Police spokeswoman Corinne Geller said troopers were called to the Faulknier County Store in the 13300 block of S. Constitution Street in Scottsville at 12:55 p.m. for a report of a black male yelling and attacking two people inside the store.

However, before troopers arrived, the suspect ran from the store and broke into a nearby home where investigators said he attacked an elderly couple, state police said.

Buckingham County Sheriff’s Office deputies were was dispatched just after 1 p.m to that home in the 800 block of Penlan Road in Arvonia for a "combative male subject."

According to police, when two deputies arrived, Perkins jumped through a plate glass window and attacked one of the approaching deputies," Geller said. "The deputy fell onto the deck as the male subject continued to fight the deputy. One of the deputies fired at the male subject."

The Virginia State Police Bureau of Criminal Investigation’s Appomattox Field Office was called to the shooting and are investigating at the request of the sheriff’s office.