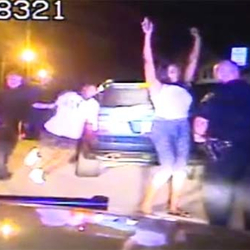 Investigators said three people were inside the car when two passengers, a man and woman, took off running.

"The male subject who exited the vehicle became combative, resistant, and produced a firearm,” said Cincinnati Police Chief Jeffrey Blackwell. “So a brief struggle ensued, which the officers were able to disengage momentarily once they noticed that the suspect did in fact have a firearm. And as the suspect turned he did produce a firearm, that's when shots were fired. We don't know how many shots, we don't know by whom," he added.