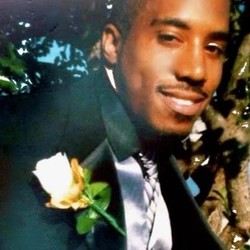 Hamilton, an unarmed mentally ill man, was lying on the ground near Red Arrow park.  Milwaukee Police Department (MPD) officers checked on Hamilton twice, found that he was doing nothing wrong, and then proceeded to leave him be.   Later MPD Officer Christopher Manney proceeded to check on Hamilton, unaware that officers had already done so.  Officer Manney ordered Hamilton to move, then proceeded to pat him down.  Hamilton then began to fight Officer Manney who then tried to hit Hamilton with a baton, which Hamilton allegedly took away and attempted to use. The officer shot Hamilton 14 times, including in the back. Hamilton died at the scene.  According to internal affairs, no additional weapons were found on Hamilton.

MPD Police Chief fired Officer Manney after the shooting, a decision that was later upheld in March 2015 by a three member panel of the Milwaukee Fire and Police Commission.

In April 2016 the family of Dontre Hamilton filed a federal civil rights lawsuit alleging the department's policies and practices led to his death.

Hamilton's brother, Nate Hamilton, co-founded the Coalition for Justice, an organization that has led rallies, marches, and street clean-ups.

After Hamilton's death, all MPD officers were required to undergo Crisis Intervention Team training, which focuses on working with people in psychiatric crises.  The Milwaukee Common Council and the Milwaukee Fire and Police Commission also created standards around the use of body cameras for MPD officers.