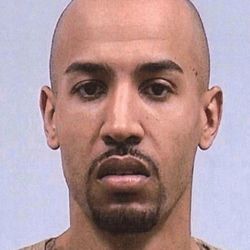 An armed robbery and carjacking in Illinois turned into a two-state, multi-county pursuit that ended with Smith dead and a hostage injured.

Smith and Grosvenor showed up in Lafayette about 5:30 p.m. Thursday, when Smith robbed the Advance America, a payday loan store in the 1800 block of Elmwood Avenue. From there, Lafayette and Tippecanoe County police latched onto Smith's fleeing vehicle as he sped north on North Ninth Street and Indiana 43, which becomes U.S. 421 in Reynolds. Other officers joined the chase on the way out of Lafayette, some laying out stop sticks to puncture Smith's tires.

Smith carjacked a sports utility vehicle near a liquor store in Brookston after the NAPA truck tires blew out, police said. He sideswiped another vehicle in Monon, but no one was injured, police said Thursday.

Marilyn Reno of Monon was recounting the day's events to friends late Thursday at a local gas station.

"My son, James, he actually watched … (a Monon police officer) put out the spikes out here on the road — on (U.S) 421 as the chase was happening," she said. "He actually had to land up in a yard because the guy had lost control."

That was the last set of stop sticks needed. Smith progressively slowed as he traveled through Monon.

"He wasn't moving very fast," said Vic Rater, who was in town when the chase rolled through Monon. "Evidently, the stop sticks had gotten a tire or two. Then there was a whole parade (of police cars) behind him."

North of Monon, Smith ran a minivan off the road, about 60 or 70 yards west of the back door of Rater's home.

Smith forced Grosvenor into the mini van as three women bailed from the van. By that time officers were approaching on foot with their guns drawn, Indiana State Police Sgt. Kim Riley said.

Smith, who had a May 19 hearing to revoke his probation from his 2003 rape and robbery conviction, died in a hail of gunfire from two ISP troopers — Weslee Ennis and Rick Hudson — and two Tippecanoe County deputies — Chris Black, 28, a four-year veteran, and Jon Lendermon, 39, an eight-year veteran.