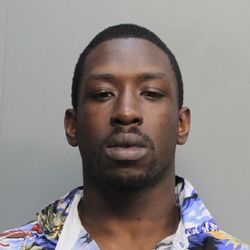 The Florida Highway Patrol has identified a suspect who was fatally shot Wednesday by a trooper in Miami Gardens as Doll Pierre Louis.

According to authorities, Trooper Misael Diaz, who was on a motorcycle, was forced to fire on Louis, 24, after he used his car as a weapon during a traffic stop near the Palmetto Expressway at Northwest 37th Avenue and Northwest 167th Street.

Surveillance video shows Diaz pound on the hood of the car to get the driver's attention. Moments later, the car bumps the trooper's motorcycle, and Diaz jumps onto the hood.

Trooper Joe Sanchez said Diaz fired at Louis after he was thrown off the hood.

"If he felt that his life was threatened and the vehicle's going to run you over, you know, that's assault with a deadly weapon," Sanchez said.

Authorities said Louis led troopers on a brief pursuit before crashing into an SUV near Northwest 37th Avenue and Northwest 175th Street.

He was pronounced dead at the scene.