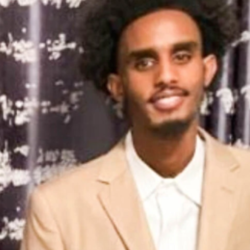 23-year-old Dolal Idd was shot and killed before by police officers in a gas station parking lot at about 6:15 p.m., when officers stopped Mr. Idd in his car at a gas station in the Powderhorn neighborhood of Minneapolis. The police said later that officers had suspected that he had a weapon.

Body camera footage of the episode shows several police cruisers attempting to box in Mr. Idd as he tries to pull away in a white sedan. His tires struggle for traction in the snow-covered parking lot, and his car is quickly surrounded.

The footage then shows the driver’s side window exploding outward, suggesting that Mr. Idd fired at the officers. One officer curses and ducks for cover before he and at least one other officer begin to fire into the vehicle. A gun was later found in the car, the police said.

Police officers and city officials said that Mr. Idd had shot first, but activists who have protested the shooting, along with the family, maintain that the footage is unclear.

Mr. Gelle said that he had dined with his son earlier that day and that Mr. Idd had left the house in a good mood. He said he had no knowledge of his son’s owning or carrying a gun.