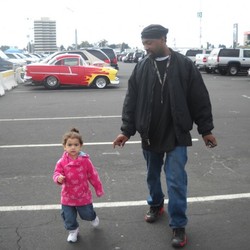 Neighbors and friends of an unarmed East Oakland barber who was killed by Oakland Police Monday night reacted angrily today to the police account of the shooting. Derrick Jones, 37, was shot to death by two police officers near the corner of Bancroft Avenue and Trask Street after a foot chase. Police say Jones was shot fewer than five times, shortly after fleeing from officers questioning him inside the Kwik Cuts Barbershop, which Jones owned. Police said the officers were responding to a domestic dispute call between Jones, who was on parole for a firearms offense, and a woman at a nearby laundromat on Bancroft Avenue. Jones took off running, Oakland Deputy Police Chief Jeff Israel said at a press conference Tuesday afternoon. Jones did not respond to commands to halt, Israel said, and instead kept reaching for his waistband. At one point, he said, an officer saw an unspecified metal object in Jones’ hands before he looked over his shoulder toward the officers. The two officers then fired on Jones, Israel said, striking him multiple times. Jones was pronounced dead at the scene, and was unarmed but carrying a metal object, which Israel declined to identify. But friends and relatives of Jones challenged the Oakland Police version of the shooting, declaring that the barber was a family man who had been shot at least six times in the back.