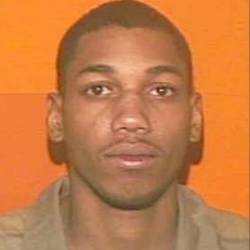 According to authorities, Derek Stokes, 33, of Parma, shot at police after he was arrested on a felony warrant. According to Cleveland police, a 27-year-old female Metroparks officer was driving Stokes to the Justice Center to be booked at the central prison unit around 8:40 p.m. on Tuesday when he took out a gun and fired shots at the woman, as well as a 24-year-old male officer that was driving behind them. The two officers returned fire and the Stokes was shot once and killed. Stokes was transported in full arrest, authorities said.

Authorities would not comment on how Stokes got the gun used in the incident. However, officials said he was handcuffed and patted down before being transported. Two independent police sources told reporters that the man slipped his arms over his legs and reached for a gun hidden in his boot.

In July 2016, prosecutors released the video embedded below which shows Stokes shooting and then running from the vehicle and yelling, "Kill me."

In July 2016, Cuyahoga County Prosecutor’s Office determined that the use of deadly force by the two Cleveland Metroparks Rangers was justified.