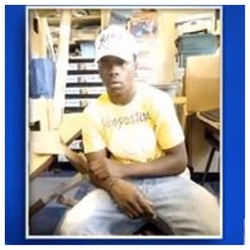 A gun pointed at his gut, the off-duty sheriff's sergeant digs through his pockets with his left hand, fumbling for money, as the three robbers surround him at the Far South Side gas station.

The sergeant is surer with his right hand, quickly drawing his own gun and firing point-blank. The gunman, 16, drops at his feet as the two others scatter, according to surveillance video that captured the robbery Monday night at a Citgo station at 103rd Street and Cottage Grove Avenue, across the street from Gately Stadium.

The sergeant swings around at the fleeing robbers, then points the gun down as the gunman struggles to get up. The video shows the sergeant kicking away the robber's gun and then opening the passenger door of his own car, apparently to get his phone.

The 16-year-old, Deonta Dewight Mackey, was shot in the head and died at the scene, according to police. He lived in the 900 block of East 104th Street, about four blocks from where he died.