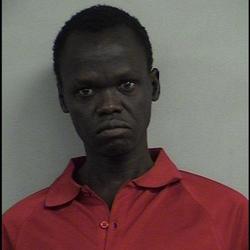 Nobody disputes the fact that Deng Manyoun attacked a Louisville police officer with a flag pole on Saturday afternoon. What is up for debate — among police and the public in Kentucky — is whether the officer’s split-second decision to respond by firing two bullets into the 35-year-old was justified. After the shooting, Manyoun, who was reportedly intoxicated at the time, was transported to a local hospital where he was pronounced dead. The coroner’s office on Sunday confirmed Manyoun’s identity. The officer, Nathan Blanford, a 10-year veteran, was placed on administrative leave while the Louisville Police Department’s Public Integrity Unity investigates the shooting, officials said.

“Either you comply or you die,” activist Tara Pruitt said at a meeting covered by the Courier-Journal. “De-escalation tactics are not used when it comes to people of color.” Another advocate, Chanelle Helm, said Blanford’s response might have been warranted if Manyoun was “a criminal with a gun.” “You’re telling me you can’t defeat a person with a flagpole who seems to be intoxicated?” Helm said. “An officer is supposed to be trained to protect people. He lost all type of control.”