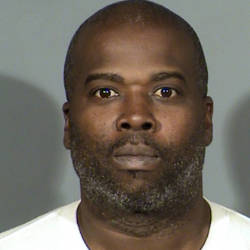 Demontry Floytra Boyd, 43, died Saturday December 1, 2018 at University Medical Center from multiple gunshot wounds after being shot by police. His death has been ruled a homicide.

Las Vegas police have identified Paul Bruning, 48, as the officer who shot and killed Boyd. Bruning has been employed by Metro since January 2005 and is assigned to the tourist safety division, traffic bureau.

Bruning pulled Boyd over on suspicion of driving recklessly near Sunrise Avenue and 18th Street. After stepping out of his vehicle, Boyd reached for “a large bulky item in his waistband,” Metropolitan Police Department Capt. Jamie Prosser said Saturday. Prosser did not say whether Boyd was armed.

Also according to Prosser:

Boyd ignored repeated commands to stop reaching for the item. Bruning used his Taser, but Boyd got back on his feet after falling and charged toward him. Bruning then opened fire.

Boyd was struck an unknown number of times.

Bruning has been placed on paid administrative leave pending a review of the shooting.