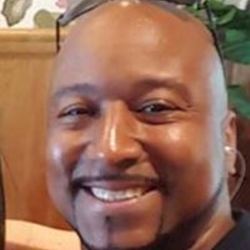 A man suspected in a 2015 Fairfield homicide who was fatally shot by police Wednesday afternoon on Interstate 80 was identified Thursday as Demilo Trayuon Hodge, 45, of San Leandro, authorities said.

Hodge, who operated a limousine service, was shot after a police pursuit that began in central Richmond and ended in the westbound lanes of I-80 near Powell Street in Emeryville after the SUV he was driving was disabled by a spike strip on the freeway.

Fairfield police attempted to pull Hodge over in the Iron Triangle area of Richmond, according to Fairfield Lt. Robert Lenke, but he refused to stop. After the SUV was disabled, officers who by then were joined by Richmond police tried to get Hodge to surrender.

But Hodge eventually got out of the SUV and when he shot at the officers they returned fire, fatally wounding him, authorities said.

Emeryville police, who are lead investigators in the case, did not say how many officers fired or how many times Hodge was hit. No police officers’ names were released. Lenke said multiple Fairfield officers have been placed on leave while authorities investigate.

Hodge died later at a hospital.

He was wanted in connection with the Dec. 10, 2015, death of 68-year-old William Freeman in Fairfield. Freeman had been found, fatally shot, in his home in the 800 block of Sunset Court.

Police had responded to the home at around 5:15 p.m. to conduct a welfare check, requested by a caller. The crime was not believed to be random.

Lenke said the case remains active and declined to release information on why Hodge was considered a suspect.

According to his LinkedIn and Facebook pages, Hodge owned the Executive Excursion Limousine Service, which offered tours in the Napa area.

His long criminal record dates back to when he was a juvenile in south Alameda County in 1987. In 1999, Hodge was convicted of stalking in San Mateo County and was sentenced to eight months in prison. In 2004, Hodge was sentenced to six years in federal prison after being convicted of possession with intent to sell cocaine and a felon in possession of ammunition. In 2008, he was paroled and ordered to undergo drug treatment and testing, and mental health treatment.

Last year, Hodge’s wife filed for divorce. A bankruptcy report indicates the couple had at least three children. Attempts to reach her were unsuccessful Thursday.

Emeryville police said the investigation is continuing and could take several weeks as witnesses’ statements, video evidence, and physical evidence are reviewed. The investigation will then be turned over to the Alameda County District Attorney’s Office, which is conducting a concurrent investigation.