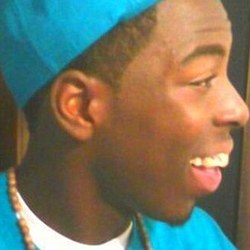 Semer reportedly hit an officer with his car while trying to flee a traffic stop. Police said a second officer was partially trapped in Semer's car while Semer drove away. The officer shot and killed Semer after he got out of the car and started to run away on foot, authorities said.

There are several people claiming to be eyewitnesses at the scene, but no one has come forward to provide a sworn statement, Mascara said at the press conference.

Mascara said Demarcus Semer was running away when he was shot. Mascara would not say if Semer was shot in the back. Mascara said he is awaiting for Semer’s autopsy results from the medical examiner.

Mascara is not releasing the officers' names at this time because they haven't been interviewed yet.
Mascara said both officers fired their weapons.

Investigators hope to interview one officer with his union representative present Monday.

The other officer who was injured is still receiving medical treatment. He isn’t available for an interview.

Semer had no prior arrests in St. Lucie County, Mascara said. He also said Semer was gainfully employed during the live press conference.

Mascara said they're still trying to determine what the initial traffic stop was for.

Mascara said there is no dash camera video of the incident to his knowledge. Ft. Pierce patrol cars are equipped with dashboard cameras. It's unknown if the officers involved in this fatal shooting had dashboard cameras.

Twelve people have said they witnessed a local police department's fatal shooting of a black motorist over the weekend, but none has stepped forward to say what they saw, a Florida sheriff investigating the death said Monday.

St. Lucie County Sheriff Ken Mascara said he and his detectives passed out cards, but no one has called.

On September 20, 2016, a Florida grand jury cleared two police officers in the killing of Demarcus Semer, with prosecutors saying the man’s actions gave the officers a reasonable belief their lives were endangered.

As of November 19, 2018, a federal judge had dismissed some of the claims made against the City of Fort Pierce in litigation over the police shooting of Demarcus Semer. Battery and other claims remain intact against Fort Pierce Police Sgt. Brian MacNaught and Officer Keith Holmes.