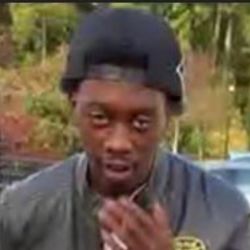 Demonstrators gathered Friday near the scene where a man was shot to death by an Atlanta PD officer on Thursday.

The demonstration became tense at times as protesters demanded to speak with police. They don't understand why police had to shoot and kill a man sitting in his car on police property.

"He sitting in the car. Is it a crime to sit in your car and wait on somebody," Denise Love questioned. "No it's not. And then you are at a police precinct there are cameras there one, two three."

According to Atlanta police two plain clothes detectives arrived at the annex and smelled an odor of marijuana. The officers approached the car it was coming from. Investigators initiated a conversation with Phillips. Police say he got out the car, then lunged back in and tried to flee the scene. But one detective was entering the passenger side.

"He had the officer half way inside the vehicle while he was attempting to flee," GBI spokesperson Nelly Miles said.  "During that encounter the officer did fire his weapon striking the individual and he was pronounced dead at the scene."

Things got intense with protesters blocking traffic and at one point jumping on top of a car passing by.  One protester even threw a trash can. Another displayed his 2nd amendment right to bear arms.

Police stood by and allowed protesters to voice their frustrations.  Many of them say this shooting should have been handled differently.

"They need to train them better than the way they are training them," Love said. "They need to send them back to training."

Police identified the person shot and killed by an officer Thursday night as Deaundre Phillips, 24. The shooting occurred around 7:45 p.m. Thursday at the Atlanta Public Safety Annex, on Donald Lee Hollowell Parkway when officers saw a suspicious vehicle in the area.

Police said Phillips had an active warrant out for his arrest from Fulton County and said he had "a lengthy criminal history, as well as a gang affiliation with the Rolling 60s Crips."