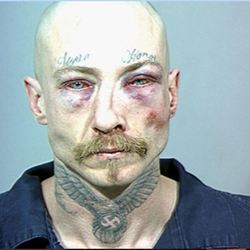 Deandre Brunston died from being shot twenty-two times by LAPD. A police dog was also shot by the police by accident at the same time. The dog was given immediate medical treatment and taken away on a medical emergency helicopter while Brunson bled to death and received no medical attention.

At the time of the shooting, Brunston was being sought for questioning from an alleged domestic abuse incident after his girlfriend called 9-1-1. After initially evading the police, Brunston was cornered in a nearby doorway where he and the officers tried to negotiate. He repeatedly told the officers he was wanted for murder (which was false), would rather die right there than go back to prison, and that he was armed and would shoot a police dog and the deputies if the dog was released or they fired first. However, he had no gun but had a flip-flop sandal in his right hand hidden under his T-shirt. Brunston repeatedly stated that he would throw the "gun" down and surrender if he were allowed to speak to his girlfriend, Fonda Brown, who he said was pregnant with his child, but his request was never granted.

At this point, many officers had their guns drawn and trained on Brunston. Lt. Patrick Maxwell had been contacted via cell phone while he was at a party in a drunken state. He ordered the dog to be released to attack Brunston. The senior K9 officer on the scene, Sgt. Earnest Burwell, refused to release the dog, claiming that releasing under those circumstances would violate the existing use-of-force policy. Burwell was replaced with a rookie K9 unit who made no such claims. The dog was released and Brunston immediately tossed the sandal onto the ground. Before the dog reached Brunston, deputies opened fire. The dog was hit by police bullets and fell a split second before it reached Brunston, who had taken one step in retreat from the dog. Within the next five seconds, deputies had discharged 81 shots, seriously wounding both Brunston and the dog, who both later died of their injuries.

The wounded police dog received an emergency helicopter airlift from the scene to a veterinary center in Norwalk (where it died later) -- while Brunston was left bleeding to death on the concrete steps, leading to allegations of Brunston receiving sub-par treatment as compared to the dog.

In 2006, Brunston's family settled with the county for $340,000 after filing a lawsuit, accusing the sheriff's deputies of causing wrongful death.