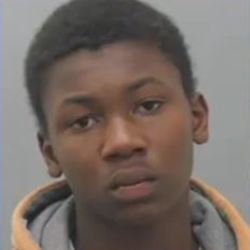 A man in a crashed SUV was shot and killed by a St. Louis officer Monday after he pointed a gun at police, authorities say.

No officers were injured in the shooting, about 12:30 p.m. on Page Boulevard west of North Taylor Avenue, Police Chief Sam Dotson said during a news conference Monday afternoon at the department’s headquarters.

The dead man was identified Tuesday as Davion Henderson, 21, of the 100 block of Anistasia Drive in Hazelwood.

Officers first spotted the SUV near Goodfellow and Page boulevards after an automated police license plate reader alerted them that the vehicle had been reported stolen, Dotson said.

They tried to stop the car, but it fled. Police did not pursue the car, Dotson said.

As police were seeking help tracking the vehicle from a police helicopter, the SUV flipped on its side in the front yard of a home on the south side of Page, west of Taylor.

Police arrived a short time later. As two officers approached, one of three males inside the car pointed a gun at them, Dotson said. One of the officers fired at that man, later identified as Henderson,  four to six times, Dotson said.

Henderson was taken to a hospital with critical injuries and was later pronounced dead, Dotson said.