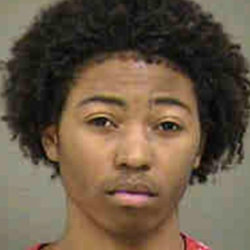 Police said 24-year-old David Tylek Atkinson exchanged gunfire with an officer after robbing a gas station at gunpoint. He was shot by the officer and later died.

Several officers who were nearby responded.

Moments before any of them got to the scene, Atkinson ran away.

Senior Officer S.M. Pekich and Senior Officer M.P. Brown, who were in full uniform and riding in a marked patrol vehicle together, were among the officers who responded to the call.

Officer Brown saw someone who matched Atkinson's description in the parking lot off Farris Court.

Brown then spotted Atkinson standing near a white SUV. According to the report, Atkinson drew his weapon and fired at Brown, hitting him in the chest. The bullet was stopped by Brown's ballistic vest.

The report says that Atkinson then ran across the parking lot, still pointing the gun at Brown.

Pekich heard the gunfire and saw Atkinson running across the parking lot with Brown pointing his gun at him.

Pekich then fired at Atkinson who continued to run, according to Raleigh police.

Brown fired his weapon again and Atkinson fell to the ground, dropping his gun and the cash that was reportedly stolen from the BP gas station.

Pekich then called for an ambulance. Atkinson died from his injuries at WakeMed hospital.