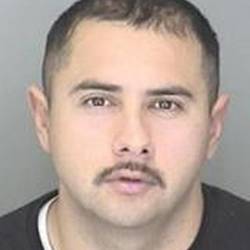 David Oliva Sarabia, 27, of Atwater was killed on July 6, 2015 in a confrontation with city police officers on Green Sands Avenue, the Merced County Coroner’s Office reported. Sarabia was accused of holding a woman against her will in a vehicle. Authorities said the woman, whose name has not been released, was held captive for several hours before Atwater police officers spotted the 2007 Ford sedan. Officers first received reports of a domestic-violence-related kidnapping around noon Monday. The victim had apparently told a witness at a store she was being held captive and asked the witness to call police, officers have said. Police investigated and eventually located the vehicle around 2 p.m. The subsequent car chase ended on Green Sands Avenue after a tire went flat on Sarabia’s vehicle, police said. According to police and area residents, Sarabia exited the vehicle already covered in blood from self-infliceted wounds and tried to scale a fence, but failed. He eventually charged at police officers while holding a knife and officers fired a stun gun, but witnesses said Sarabia pulled the Taser probes off his bare chest and charged again.