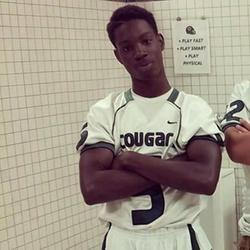 David Joseph, a 18-year-old high school student shot and killed by a Texas police officer, was unarmed and naked when a cop gunned him down in an Austin suburb.

The 18-year-old suspect, who was black, became the subject of several posts on the Austin neighborhood’s Facebook page before the officer confronted him 10 miles northeast of the city’s downtown just before 10 a.m.

An officer found the suspect standing in the middle of a street and “he appeared to be naked,” Assistant Police Chief Brian Manley said at a Monday afternoon media briefing.

The initial encounter was captured on a police dash cam, Manley said, but it failed to capture the moment the suspect allegedly charged the department’s 10-year veteran and the shooting that followed.

“Ultimately, you can hear shots being fired,” Manley said.

A witness heard the officer fire two shots without ever using his stun gun. The suspect died at a local hospital.

On Friday March 18, 2016, the autopsy report was released revealing that Joseph did not have any PCP in his system at the time of his death. According to the family's attorney, the evidence from the medical examiner also showed there was no up-close struggle where Officer Freeman had to pull his gun.

October 2016 Petition :Officer Freeman should not work for the Austin Police Department, or for any other law enforcement agency. Officer Freeman has illustrated that he was incapable of de-escalating a situation where a person is distressed, unarmed and unrobed.