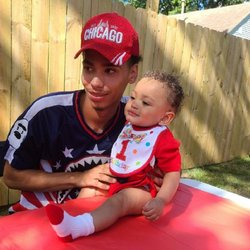 On Sunday, April 11, 2021, Brookly Center Police Department (BCPD) officers pulled over a young man during a traffic stop.  According to a statement by the department, officers determined that the man had an outstanding warrant and attempted to take him into custoy; he re-entered the vehicle.

One officer fired their gun, striking the driver; the car traveled several blocks before striking another vehicle.  Officers in pursuit and responding medical personnel attempted to render aid, but the man died at the scene of the collision.  A femal passenger in the car sustained non-life threatening injuries during the collision.

According to a New York Times report, the Minnesota officer who shot Daunte Wright meant to fire his taser.

The Hennepin County Medical Examiner's Office says that they will release the person's name following a preliminary autopsy and family notication.  However, resident Katie Wright came to the crash site and asserted that the driver shot and killed by the officer was her 20-year-old son, Daunte Wright.  She stated that he was in the car, a gift from family, with his girlfriend and called her when the police initially pulled him over.  Ms. Wright stated that her son said they pulled him over because he had air freshners hanging from his rearview mirror and his car insurance.

The Bureau of Criminal Apprehension, a division of the Minnesota Department of Public Safety, was also present at the scene for investigation.

On December 23, 2021, Kimberly Potter was convicted of manslaughter for killing Daunte Wright.

On February 18, 2022, Potter was sentenced to two years in prison, far less than the standard of about seven years for manslaughter. The judge said leniency was warranted because the officer had meant to fire her Taser and not her gun.

On the evening of April 11, 2021, a large crowd of protestors gathered around the Brookly Center Police Department (BCPD) headquarters.  Friends and relatives of Mr. Wright also held a candlelight vigil at the scene of the crash.

According to the New York Times, "Wynfred Russell, a City Council member in neighboring Brooklyn Park, said in an interview on Sunday night that his community and Brooklyn Center have a large percentage of Black residents who are on edge over policing."  The New York Times and local news outlets also reported a number of businesses looted in Brooklyn Center and Brooklyn Park as well as vandalism of the main Brooklyn Park Police Department building.  BCPD eventually declared that the protests as unlawful, using tear gas to attempt to disperse the crowd.

Mr. Wright's death occurred during the midst of the trial of Derek Chauvin in Minneapolis for his role in the death of George Floyd in 2020.