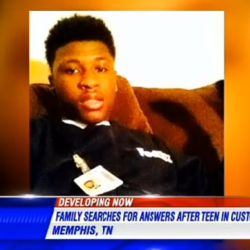 The MPD officer stopped a car for a broken headlight in the 5700 block of Winchester Road. The officer issued the driver a ticket and let him go. However, in a possible case of mistaken identity, the officer believed the passenger in the car had several warrants for his arrest. Darrius Stewart, the 19-year-old passenger, was placed in the back seat of the police car to verify the warrants. Investigators said when the officer opened the back door to handcuff Stewart, he kicked the door and attacked the officer. During the fight, Stewart grabbed the officer’s handcuffs and swung them at him. The officer grabbed his gun and shot Stewart to end the fight. Stewart went to Regional Medical Center in critical condition where he later died. The officer had several cuts and bruises from the fight, but he did not need to go to the hospital. He is relieved of duty pending the outcome of this investigation.

Stewart's mother said her son was going to attend the University of Memphis in the fall. He planned to become a doctor, and he has never been arrested. Police said they could not provide answers about the warrants at this time. "We don't understand," aunt Terry Stewart said. "Police are supposed to serve and protect, yet society fears. I think they are hiding a lot of things." Memphis Police said they do not know for sure if the warrants were Stewart's. They said they were able to access his name and birth date and find warrants, but were not able to access pictures from other agencies.

Memphis police announced on July 26, 2015 that they were investigating threats against the officer who fatally shot Stewart.

On August 20, 2015, Shelby County District Attorney General Amy Weirich announced that her office had received TBI's 800-page report on the Darrius Stewart investigation. She said that she had not yet read the report or determined if charges would be filed against Memphis Police officer Connor Schilling.

On Tuesday November 3, 2015, Weirich announced that a Shelby County grand jury chose not to indict Officer Connor Schilling for the shooting death of Darrius Stewart.

A Chancery Court judge ruled on November 30, 2015 that both the state and the Memphis police officer who shot and killed Darrius Stewart this summer each have standing over the proposed release of a Tennessee Bureau of Investigation report into the killing. In a 26-page ruling, Chancellor James Newsom essentially allowed both parties to proceed with their case. The Shelby County District Attorney's office and the TBI are asking that the full report be released. Officer Connor Schilling, who was not indicted in the killing, has asked that the report not be released until it's determined whether he will face any federal charges

On July 13, 2016, attorneys for the Stewart family announced a multi-million-dollar federal civil rights lawsuit Wednesday against the city, former police director Toney Armstrong and the officer who killed Stewart nearly one year earlier.

On Tuesday afternoon, September 27, 2016, Edward Stanton III, United States Attorney for the Western District of Tennessee announced that no federal charges would be filed against the officer who killed Darrius Stewart. Stanton said the decision not to charge Schilling came after a “comprehensive, independent” review of the circumstances related to event by his office, the Federal Bureau of Investigation, and the U.S. Department of Justice’s Civil Rights Division.

A coalition of ministers wrote a letter on September 25, 2015, urging Shelby County District Attorney General Amy Weirich to update the public on the investigation of the July 17 fatal shooting of Darrius Stewart by a Memphis police officer.

Around 100 people rallied outside the Criminal Justice Center Tuesday afternoon, November 10, 2015, to protest the fatal police shooting of Darrius Stewart and the decision by a Shelby County grand jury not to indict officer Connor Schilling on any charges in the incident.