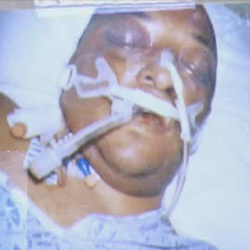 Over the past several years, the city of North Chicago, located 35 miles north of Chicago, Illinois, has seen a disturbing spike in police brutality. Recently, Darrin “Dagwood” Hanna, 45, was beaten and Tasered at his home on November 6 of this year. He died on November 13.

Police arrived at his home to address a domestic disturbance. Hanna’s girlfriend was found sitting outside the apartment. Hanna refused to exit the home. The police entered the residence to subdue and arrest Hanna, who was beaten and shot with a Taser repeatedly for more than 20 minutes.

Witnesses reported that police took Hanna out of the apartment covered with a sheet to hide the injuries from onlookers. He was taken straight to the hospital.

Family said that Hanna was beaten so badly that he was not recognizable. His mother, Gloria Carr, identified her son by his feet.

According to a recent report in the Sun Times, the Lake County coroner stated that the cause of Hanna’s death is still pending, and that Hanna’s body had multiple traumatic injuries, including marks from a Taser.

North Chicago residents have responded with outrage over the beating and death. More than 200 people protested outside North Chicago’s City Hall on November 19 at a memorial rally for Hanna. On December 5, a large crowd packed into a city council meeting. Photos were shown of Hanna in the hospital, connected to a ventilator. Members of the man’s family and other victims of police brutality have attended city council meetings to demand the resignation of North Chicago police chief Mike Newsome.